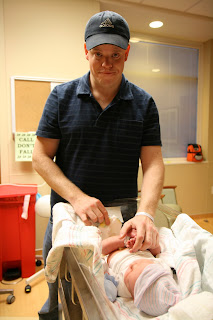 I lived 32 years without ever changing a diaper. That streak is over now. I always thought it would be a hard transition, but after watching Noelle's laborious labor and the pains associated with breast-feeding, I knew dealing with feces would be my job. 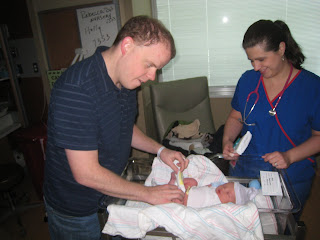 To help me feel somewhat less guilty, Jackson helped out by giving me some weapons-grade muconium to deal with. If you are ignorant of what muconium is, stay that way for as long as possible. However, as disgusting as it was, I did not gag or get scared. I just used about twelve wipes and eventually, all the muconium was removed from every crevice it found its way into. 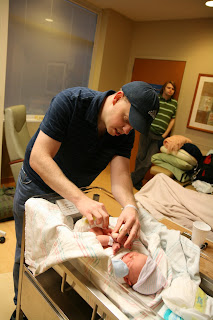 Since then, Jackson has assisted more by pooping as I was wiping him. That's something I have never really watched before. And you know, I don't like feces, but none of this seems to be bothering me in the least. It's not even like I have to say he's worth the trouble - it's no trouble at all.
Although the muconium - that's something no dad has ever mentioned to me. So, if you are a dad-to-be, maybe you want to google that.
Posted by Rob MacGregor at 11:34 AM

Doug was on diaper duty in the hospital too. :)

Good for you! I'm glad you're not getting grossed out by it.