You hear the stories, you watch the videos, but you have no idea - childbirth is the miracle everyone says, but it is also that moment when you say, "I now will spend the rest of my life making this up to my wife." It only took an hour of pushing, which will henceforth be known as the most difficult hour of Noelle's life. As the dad, my view allowed me to see both Noelle's contorted, focused red face and the progress down below. Both amazed me. The effort it took to accomplish what looked impossible - I've never been prouder of my wife. All I could do was count out numbers to focus her pushing and tell her what I could see - she had to keep pushing past the pain without seeing what she was accomplishing.

And then he was here. And they asked me to cut the cord, which was accomplished quickly with a "Welcome to the world." Then the nurses whisked him to the other side of the room to be cleansed and weighed and whatnot. I told Noelle how she had done it, it had all been worth it, we were now a family, but she didn't get to hold him for another forty minutes due to the repair work that had to be done on her. I took pictures, held him, introduced him to her, but she could only look until our doctor was done with her. Finally, she got to hold him, and we were ready for our hour alone with him. Turns out that hour was already mostly gone, and it was almost time for him to go to the nursery. We decided then he looked like a Jackson North, then Noelle looked at him and asked me to get her mom from the waiting room.

The moms enjoyed those five more minutes, and then I had to carry Jackson off to the nursery. Just like that, that little bit of life we had created was in someone else's hands. Before we could begin to worry about him, we had Noelle to worry about. The stress of the labor, the blood loss, the magnesium sulfate she had been taking for over twenty-four hours - Noelle was feeling the pain, and her blood pressure dropped dramatically. It only took a few minutes of work from the nurses to get her better, but it was another scary moment in a day full of them.

That's the thing. As much as I have tried to be there for Noelle and help her through this all, in the end, this was all her. She's accomplished so much in her life, triathlons, softball championships, tennis scholarships, MS 150's, etc., and this was without a doubt the most difficult thing she's ever done. But she did it, no matter the pain or stress. I already wanted to be a great dad for our kid, but now I want to be a great dad to the whole family, because Jackson's mom deserves nothing but the best.

And just when I was thinking now was my time to start shining, today a hungry Jackson tried to latch on to my nipple. Sorry kiddo, there are some things that only Mommy can do.

That's why she's my hero. 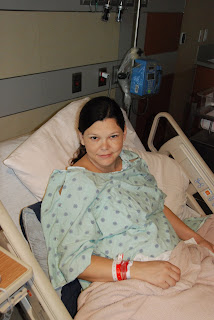 We love you, Noelle.
Posted by Rob MacGregor at 4:54 PM

way to go girl! love the expression. I'm so glad you have Rob for this crazy ride

GOODNESS GRACIOUS! Thanks for sharing those touching words, Rob.

Yeah, that made me teary...and then Noelle's expression cracked me up.

Christ on a cracker--quit making me cry!

Beautiful words, Rob. Please print out your essay and frame it along with that shot of Noelle. Because it, like your new baby, is awesome.

That was so sweet, Rob! Thanks for making me cry at work. Dang!

You will be a great dad for your family. That is a lucky bunch!