So things are moving slowly. It is still hours before they will start the pitocin that will actually induce the labor, so we've actually been sleeping. Our doctor just visited and allowed Noelle to order food, which is a mixed blessing. Sure, she's hungry, but labor must not be close if she's allowed to eat. She does say that she had no idea Frosted Flakes could be so good.

When I arrived home last night from setting up my classroom (a little) for my sub, we called the doctor about the blood pressure and she said to get to the hospital. When Noelle stood up and began getting ready, I realized she was wearing a shirt my brother made in high school for his senior shirt. It's a family favorite, but I did ask, "Is this how you'll be greeting our son into the world?" 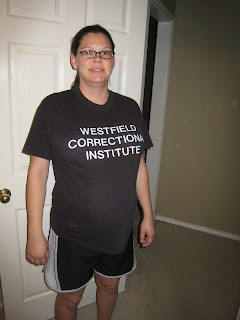 So we did the quick change as Rob's brain exploded, and we ended up with this nice shot before we left. 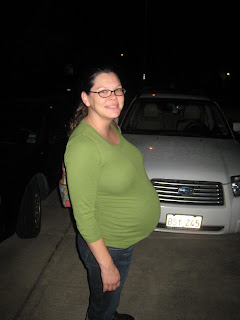 She does look as pregnant as she's going to get there.
Of course the first thing she did at the hospital is change into a gown.
We'll keep you updated when we can, but we'll be here for a while. Wish us luck and early epidurals!
Posted by Rob MacGregor at 8:23 AM

I am thinking about you all every minute!! LOVE the t-shirt story - haha! I SO wish I could be there!!