Today was a momentous day for three reasons…
1. Jackson had his first wellness check-up
2. We took Jackson into public (other than a doctor’s office) for the first time
3. Noelle ate a little bit of “real food” at two different meals and so far they are still in her body

We’ll start with Jackson’s check-up. We have been a little worried about how it would go, since Noelle has been sick. She’s breastfeeding and we weren’t sure how her illness would affect her milk. Last visit the doctor told us today Jackson should be back to his birth weight for everything to be okay. Not only was he back to his birth weight, but everything checked out perfectly. Apparently he is also a very strong little baby. The only downside to the visit – is that we had to undress him for the exam and he peed twice within ten minutes – once on the exam table and once in Noelle’s lap.

We’d also like to take a little time to plug our awesome doctors. First of all, Noelle’s OBGYN is awesome. If anyone is looking for someone, and lives anywhere near Katy, they should give Dr. Tiffany Mullin a try. Not only is she super knowledgeable, but she is also extremely caring and supportive. She listens to what you have to say, takes the time to make sure she answers all your questions (and never rushes you), and just makes you feel at ease. Her nurse, Kim, is great too. She can always tell us the new restaurants in Katy to try and also sneaked Noelle in before everyone else when she was sick earlier this week, so we wouldn’t have to wait long.

Now on to our pediatrician. Dr. Mullin recommended our pediatrician based on what we said was important to us and our personalities. She hit the nail on the head. Dr. Alex Gonzalez couldn’t be more perfect for us. Like Dr. Mullin, he listens to all of our questions, even though most of them are probably silly first time parent concerns, and also never makes us feel rushed. He has this quiet understated sense of humor that we both appreciate. Rob was a little worried about a runny poo that Jackson produced. Dr. Gonzalez suggested that next time there’s one that concerns him, he seal it up and bring it in for him to look at – he said it would be a little present for him. When Rob joked about taking a picture of it, Dr. Gonzalez made a joke in return about posting it on FaceBook. Do not worry – that will NOT happen.

Alright – on to number two and three. First of all, Noelle felt better yesterday until the early evening. Like yesterday morning, she was feeling better this morning, so we decided to make a stop or two. First, we ran into Babies R Us for a few items. Other than the employee with the worst cough we have ever heard, it went well. Then, we had to run home to meet the oven repairman. Anyone that has been to our house lately knows how annoying our oven door is. We were thrilled when we realized that our insurance covers it! We have been living with the impossible door for months. They have to order a part, but soon the door will not be a pain in the butt anymore! After the awesome repairman left, we ventured out for Jackson’s first trip to a restaurant. When we arrived, we realized we forgot the diaper bag. Luckily, this is how Jackson stayed the whole time so it wasn’t an issue. 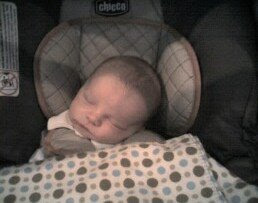 And….drum roll please….. Noelle ate a chicken taco, some chips and guacamole, and refried beans for lunch and some Shepherd’s Pie for dinner (thanks MacGregor Grandparents) . Hopefully that means she is on the road to recovery. Keep your fingers crossed.

Posted by Rob MacGregor at 9:30 AM

Reading these entries makes my day!! So happy everything seems to be falling into place!

I hate unsolicited advice...but...eat out lots now. It get exponentially more difficult (and messy).

Based on your delivery, your OBGYN has to be amazing. When we visited, Dave and I totally had hospital envy.

Don't you LOVE Dr. Gonzalez? He is Kingsley's doctor too. He's great with Kings and makes her feel so comfortable. Actually all the docs at TCPA Katy have been incredible!

Pics are so cute!

totally agree about the enjoy eating out now comment... It becomes less and less fun for a while.... especially as you hit the 2 mark!! :)