So, while Noelle is still sick and we’re dealing with that, I figured we’d use this opportunity to share some positive news. But a lot of people have been asking, so I’ll just give the bad news – Noelle has been having intermittent stomach pains and intense nausea since Saturday, so the past few days have been difficult and stressing. Jackson is doing well, so no worries there, but do keep Noelle in your thoughts, prayers, and wills.
But now – good news! You know how excited you were when you heard we had a baby? Well, guess what? We actually have a family of five. Yep, our other two babies have been adapting to the new arrival, and I figured it was time to share their story. 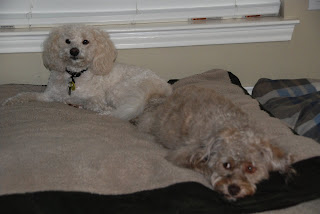 See, Ruffles and Schuley are our dogs. And for those who say dogs aren’t really part of the family – you should get a dog sometime and maybe learn to love too. Anyway, Ruffles has been with us for almost two years – he’s a poodle-terrier (poorier?) we found at a local shelter. He apparently ran away from his previous owner, which is believable because he is known to run Schuley has been with us for about fifteen months – she’s a terrier-poodle (terrdle?) that we got as a puppy from another shelter. (Bob Barker would love us, and we love him and miss him.) They have made us laugh and smile and yell and deal with feces and whatnot, training us for Jackson’s arrival. And now he is here, and everyone says that the dogs will be jealous and depressed.
When Jackson came home, we let each dog approach him separately and smell him. They were interested, but they were more excited because Noelle’s mom was here, and she’s their favorite human.
Well, here’s how the dogs are doing ten days in. Ruffles is not fazed. He likes to smell Jackson when he can, but he doesn’t lick him and he doesn’t let Jackson keep him from trying to snuggle up to Noelle in the bed. Schuley is fazed. She used to hang out on the bed with Ruffles, but now she seems to want to spend all her time under the bed. That’s weird. She also is obsessed with trying to lick Jackson. It takes a lot of disciplining to keep her away.
We were worried there would be problems, and over the last few stressful days, our attention for the dogs has been even less. The air conditioning, the hospital, the doctor, this sickness, the schoolwork piling up, and, you know, the week-old baby – it’s hard to give the dogs some tummy-scratching time. So when we got home yesterday from the doctor after the air-conditioning guy left after I got three hours of sleep, I was ready to take a nap. I let the dogs out to the backyard to do their business, and got into the jammies. Jackson was cleaned, Noelle was comfy, and a thought hit me.
The gate was open from the AC guy.
I threw on my clothes and ran for the front door. I opened the door, and there was Schuley. She has a good habit of getting out of the backyard, freaking out, and sitting on the door step. She’s a good girl. Ruffles though had run away from his first owner, and I was scared he would run from us. I went around to close the gate and made sure Ruffles wasn’t in the backyard. Nope.
I can’t really describe that sinking feeling I got when I went outside on the block. He could have been anywhere. I’d never find him, and he doesn’t have the traffic fear he should have to keep him safe. I went in to get my bike to begin scouring the neighborhood. There was Ruffles, waiting at the backdoor.
Good boy. Good girl.
I know the arrival of Jackson is going to change our relationship with our dogs, but they’re always going to be part of the family. I look forward to Jackson getting to build his own relationship with the dogs. It will be fun to share best friends with our son. 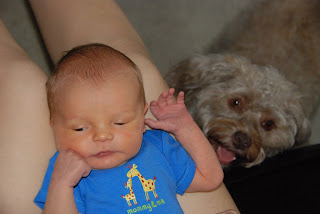 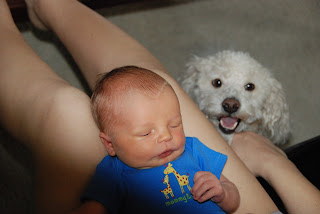 Posted by Rob MacGregor at 1:45 AM

Love it. :) Lots of prayers with you guys always!

I liked the shout out to Bob Barker!

Look at that hairline.

Oh and something must be going around. I'm puking my guts out over here.

Dealing with a newborn/adjusting to family life/puking...damn, Noelle needs to catch a break.

Thinking of you guys.

the dog story is typical rob story telling at its finest.