It's been a while since an update, primarily because Noelle has been watching Jackson full time while Rob has been back at work. The school year is almost finished, and Rob had to return to teaching to prepare his kids for finals and grade everything they had done in the past three weeks to determine whether or not they graduate. Last week involved long nights of grading followed by long days of working, which meant Rob was exhausted by the time the weekend came around. Jackson was there to ensure every waking moment and sleeping moment had a constant reminder of who all this work will benefit, although his fussiness at night wasn't always the most welcome reminder.

Now it's about seven hours until the next workday begins, but Rob will be leaving home in five hours to get everything ready. Is he stressed? Not really. Next to him is Jackson, who kept him company as he graded his last projects of the 08-09 school year. Jackson has been asleep for the past hour, and his angelic face and tiny sleep noises are all Rob needs to remind him that a summer full of watching Jackson sleep is just four days away. 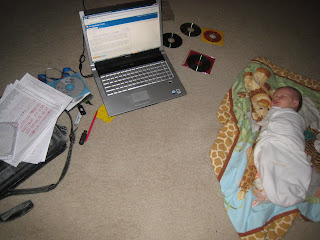 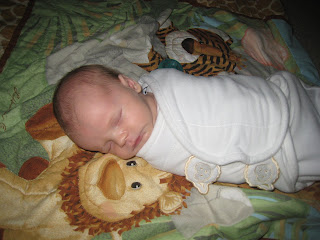 My Little Buddy (in fleece straight-jacket)
Posted by Rob MacGregor at 12:28 AM

Love it! Best of luck in these final school days - you guys are so lucky to share such a special time all together!!

We're hoping to see you guys as soon as we get back. Jackson up for a trip to see the Goulds for dinner.