Another story by Jackson and Daddy

Once upon a time, there was a fish that had seven friends.
He knew them all from his school for fish.
It was the first day of summer. On that day, he went to school and could not find anyone there! He did not know what to do!
Where were his seven friends? Did they not want to play finball with him any more?
He went home and sobbed.
His mommy saw that he was upset, and she asked him why. He said none of his friends were at school. In fact, no one was at school!
She said that it was summer, and in summer you get to stay home.
"But I do not want to stay home if I cannot see my seven friends!" the fish said.
"It's okay. You can go outside and play, and you can have fish dates with them as well," his mommy said.
He did not know what a fish date was, but he liked the idea of seeing his friends, so he asked his mommy to set up a fish date with his friends.
His mommy called his friends' parents, and she asked them if they were able to play.
His friends' parents were happy to hear from her, but not all of them could play. Only three friends could get together.
They had fun, but they missed their other friends.
Over the summer, there were many fish dates, but they never got all seven friends together with the fish!
Finally, summer was over, and the fish's mommy told him to wake up and get ready for school. The fish was tired.
He swam to school and saw all seven of his friends waiting for him!
They were so excited to see each other, and they were ready to play some finball.
But then, the bell rang, and their teacher said, "time to come inside and do some math problems!"
The friends swam inside, and they all hoped that they would get to play at recess.

An Afternoon Story by Daddy and Jackson

Once upon a time, there was a little aardvark whose name was Reginald.

He loved his home very much.
His home was under a red plastic slide at the playground, where he had lots of ants to eat.
One morning, all his ants were gone!
He woke up hungry, and he could not find any ants anywhere!
He looked everywhere on the playground, but he still couldn't find the ants!
Reginald was worried that his favorite meal, breakfast, would have to be mulch instead of ants.
He tried some mulch, but he didn't like it, so he thought he would try the sand.
The sand was worse than the mulch, and he spit it out in a sandy cloud.
Next Reginald tried some grass, but it was even worse than sand and mulch! He spit it out into a lake!
He saw some weeds floating in the lake, and he stuck his long aardvark tongue out to taste them.
The weeds tasted the same as the grass, but it was a little longer than the grass.
"This will not do," thought Reginald, "I must find the ants!"
He went back to the playground, and he tried to bite on a basketball and the slide, but those barely even moved.
He was so hungry that he was willing to try anything, but something moving on the slide got his attention.
He saw a kid coming down the slide, and he ran to hide. When he hid, he found a few ants for his breakfast.
As he ate those ants under the jungle gym, he realized that there were a lot of ants there, and they were eating candy!
He saw the kid coming for the candy, so he ran away with the ants.
"My candy must have fallen out of my pockets," the boy said. "Now there are ants in my Smarties and Kit-Kats!"
Reginald was hiding behind the wired fence, and he finished off his meal there.
He noticed that the ants had a deliciously sweet taste to them from the candies. It was Reginald's favorite breakfast ever. 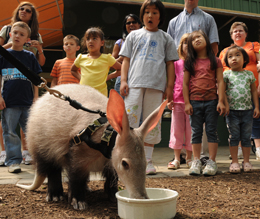 Posted by Rob MacGregor at 4:37 PM No comments: