Last week Rob returned to work which made me a “full-time” stay at home mom for two weeks. Obviously I have been at home with Jackson for a month, but I always had Rob there helping out. Now, if I need to go to the bathroom, I’m on my own; I can’t just pass Jackson off to Rob. The two weeks have been trying at times – like the day that Jackson didn’t sleep a wink, but they have also been amazing. Obviously I am biased, but Jackson is the cutest, most amazing, little thing ever and I am head over heels in love with the little guy. 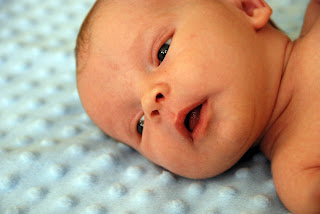 It’s amazing to me that he already has such a personality. His facial expressions, habits he has already developed, and definite likes and dislikes. He already “plays” with me – as much as a newborn can. When I say play, I mean interact. Usually after his midmorning feeding he likes to stare at me. He can track me and he’s starting to recognize my voice. He is also getting good at swatting things and grabbing things. (By the way - the other day Jackson grabbed his pacifier with his LEFT hand and swatted/threw it. Although, I think he might be a lefty like Mommy, I will in no way try to force him to be a lefty. I'll still love him if he's right handed.) His current favorite toy to grab and swat is Mallory the Monkey. We have always loved Mallory. 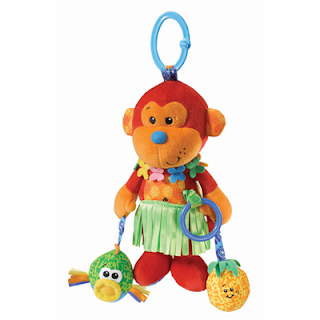 For the most part, I think ever since we found her, back when Shannon was pregnant with Emily, we have bought her for everyone we know that’s had a baby. Of course we had to put her on our registry. Thanks Scott and Monica for getting Mallory so we could introduce Jackson to a colorful world. Jackson also gets his tummy time each day. He’s great at turning his head back and forth, as well as using this time to pass a lot of gas. I also read him his favorite book each morning – Brown Bear Brown Bear What Do You See? Each page has one big colorful picture, so Jackson loves to stare at the pictures of the animals. Finally, he also loves to play in his “gym.” He spends most of his time staring at himself in the mirror, but he’ll grow into the rest of it. Our friends Shannon and Joe stopped by with their girls a couple of weekends ago. The girls are about 2 years and 7 months and 14 months. They loved it, so we know it’s a toy he will play with for quite a while. Thanks North 2 (and Ms. Lopez and Ms. Barras)! 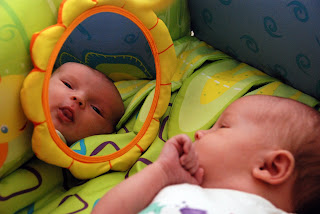 Afternoons with Jackson are less predictable. Sometimes he sleeps and sometimes he doesn’t. Either way, we love the little guy. 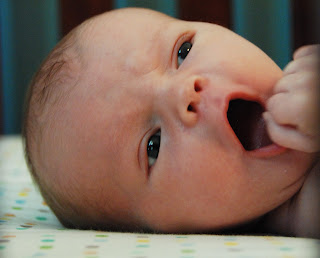 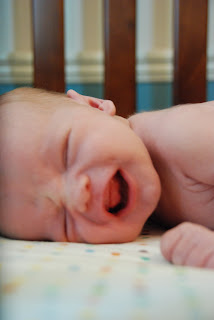 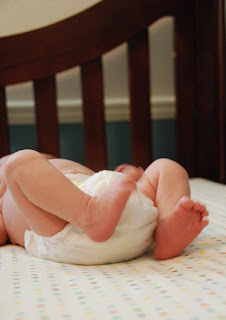 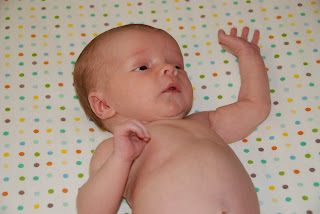 great new pictures! I especially like the first one!

I love the one with your dog. Jackson looks a little unsure of what's coming next.