Yesterday, Thursday, May 5, Ben was not acting normal. He was extremely fussy even when held. Usually, if he's being held, he's happy. He was also shaking his head some, so I thought he had an ear infection. Last check-up we were told to watch his ears because they were red. We were able to get the doctor to squeeze him in, but his ears looked great. There was no sign of any infection, just a fussy fussy baby with a horrible rash. No fever either. The doctor guessed it was a virus and we just had to deal with a fussy baby for a few days, but warned us to call if he got a fever since he just turned 2 mo old. The guideline is ER for 100.4 or higher at his age.

That night around 11pm he seemed very hot. We took his temperature and it was nearly 103. He was still very fussy, especially if he was moved the slightest bit, his eyes were red, and his rash was still awful looking. We called the doctor and were told we had to take him in.

After a lot of waiting he had some blood work done and a urine test. They did the blood work first, which meant an IV in his tiny little vein. It took a couple of tries and was difficult to watch. After that they inserted a catheter to get a urine sample. Since he was so upset during the IV episode, he had just gone to the bathroom and they were not able to collect enough to process it. At this point the doctor suggested a better way to collect it (basically taping a bag on him to collect the urine) that was much less painful. They gave him some fluids because of his high fever and to get him to urinate.

Most of the blood work looked okay, only two things were a little off. The ER doctor (who was one of the best I've ever met) said something wasn't quite right and based on all of his symptoms she really wanted to test him for meningitis. Although I really didn't want him to have a spinal tap, I also knew he was displaying many of the symptoms. Ben did much better than I expected and only cried briefly. It only took about 2-3 minutes.  When the results were in, we were fully expecting her to say he was fine and we could go home, but had to watch the fever. Instead she explained how his white blood cell count was high in the fluid which could mean a virus or bacterial infection and he had to be admitted. She didn't know it was meningitis and wouldn't for 2 days, but in the meantime we had to stay and she was going to start antibiotics in his iv twice every six hours.

Basically 9 out of 10 times, it's the viral form (or another virus) but in someone his age, they give everyone the antibiotics so that 1 out of 10 kid doesn't die. By the time you get the results, it's too late to start them.

Overall Ben is very miserable and it's sad to watch. When he's asleep he's pretty peaceful. 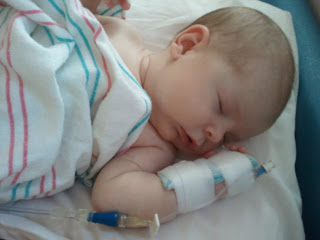 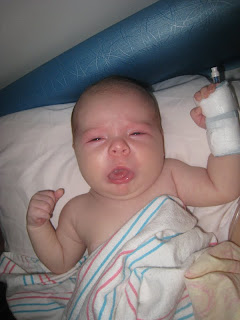 Posted by Noelle MacGregor at 7:09 PM

Poor guy. Sending you all lots of love.

My heart is breaking for all of you. I hope he is feeling lots better today and you're all home tomorrow.