We were shopping at Claire's the other night (on our date because that's how we roll) and we found this little $3 stuffed dog. We showed it to Jackson Friday, but he apparently was waiting until Saturday to fall in love. 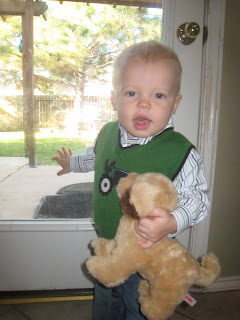 Now Jackson loves dragging his dog along with him everywhere. We named him Tiptoe because Jackson loves whispering "tip toe" as he walks around, thanks to the We're Going on a Bear Hunt book. Today we went to Essence House Cafe for breakfast while Mommy works, and he fed Tiptoe some of his toast. 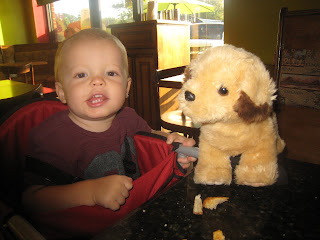 Jackson's puppy is apparently subject to the rules of our house. Whenever Ruffles or Schuley try to eat Jackson's discarded food from his chair or from the table, we tell them to get down. Jackson here attempts to feed Tiptoe then chastises him by repeating "down" incessantly. Or maybe he's saying dog, or dawn, or d'oh. You be the judge.

I figured this would be a good time to show him how to treat puppies gently, but he still needs some practice.