It's not often Jackson gets to hang out with his pre-ordained Best Friend Forever from Birth, but it seems ridiculous that it doesn't happen more often. Our friends Scott and Ashley's son Thomas is about four months younger than Jackson, but we're finally getting to the point where that isn't too important. I went over to watch the Texans get annihilated on Scott's humongous TV, and Thomas and Jackson immediately hit it off. Thomas wasn't too thrilled about me until I pulled the camera out. 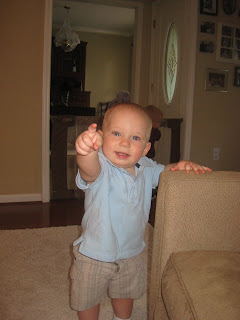 They snacked, they shared, they played with Thomas's awesome toys, and they talked to the dog. Thomas enjoyed putting blocks in his mouth and banging them with other blocks. 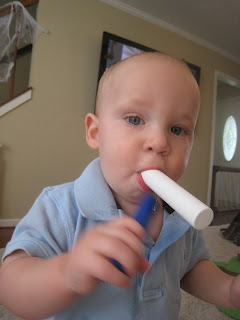 They played nicely until a play laptop got involved. Then Thomas pushed Jackson and tears began - their first fight. 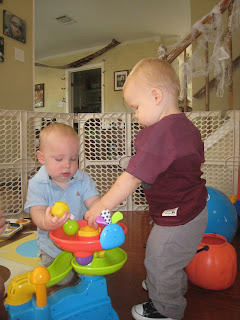 Afterwards, Jackson and I met up with Mommy at Willie's Texas Roadhouse. Two firsts happened there - we bought Jackson his own meal and it was the first time we let him just play in a sandbox instead of eating. He loves sandboxes but please do not buy us one. 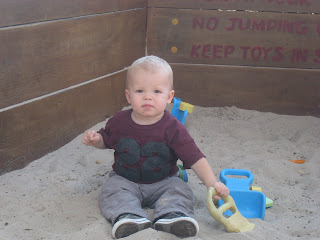 Posted by Rob MacGregor at 8:50 PM