Okay. Last post for the night. Just can't resist. I told Jackson it was time to brush his teeth with Dada and then Mama would read him his stories. He went into the other room and picked up a book that he's had us read to him about 15 times today and walked out. Assuming he was going to find Dada, I went in the other room to do something and found Dada. We went to find Jackson and this is what we found. Not only did he pick out his books for the night, but he was up in the chair rocking himself and looking at one of the books. When I told him it was time to brush his teeth and then I'd read him the books he held the book to his chest and pointed to the chair to show me where to sit. 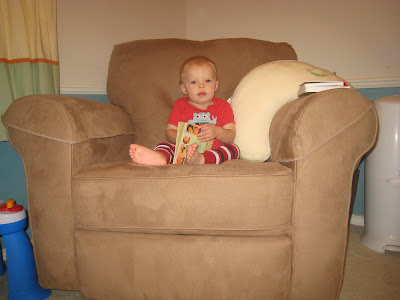 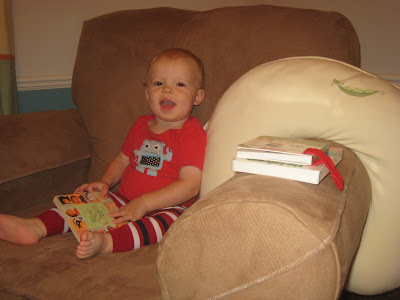 After this picture, his fake smile emerged. After Rob stopped taking pictures he said "more" and pointed to the camera. Apparently we have a camera hog with a fake smile.
Posted by Noelle MacGregor at 8:19 PM