Rob is an amazing Daddy. I knew he would be from the beginning. Not only does he do the yucky stuff (like changing diapers), but he does all the fun stuff as well. I love all the little Daddy/Son routines they have together. I love listening to him when he's in Jackson's room putting him to bed. I love watching them play together, read together, and laugh together. I love our little family.

On Sunday, to celebrate Father's Day, Rob wanted to have breakfast at Essence House Cafe. This place is his new obsession. Rob conned me into going for lunch earlier in the week by telling me they have the best tea ever. I love ice tea and agreed to go. (I am not normally a big fan of sandwich places. I think it's a waste of money because you can easily make one at home for pennies.) Although I hated their ice tea, the food was good! Neither of us had been there for breakfast yet, but I assumed it would be good as well. Oh it was. We both get Eggs a la Mexicana. Holy cow. They were good. We also had dinner at one of Rob's favorite restaurants... Chuy's of course.

Before leaving for breakfast, Rob opened his Father's Day presents. He got an Iron Man 2 card and a "Co-Pilot" for bike rides.

That evening we decided to bike to Rob's favorite Gelato place Spelato. At first, as you can see, Jackson wasn't sure what to think. 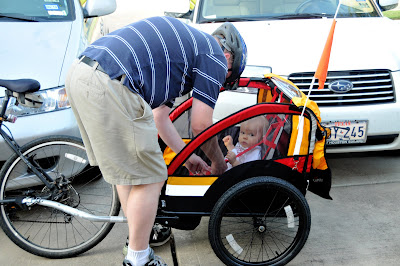 Then, he got comfortable. 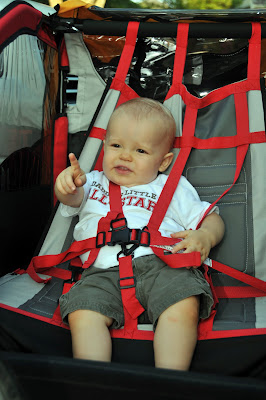 Until we put a helmet on him. He won't wear a hat and apparently, he doesn't like helmets either. 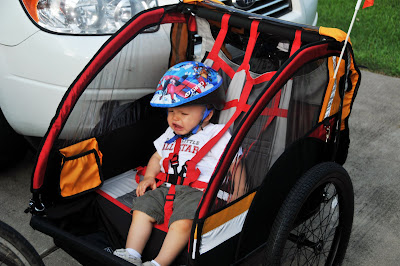 Once we were moving he was okay... for the most part. By the time we drove to the gelato place, found out they were closed for Father's Day, and drove back to our neighborhood he was DONE. We had to stop a few streets from home to get him out. Poor guy. I don't know what we did wrong, but the straps just didn't seem right and seemed to be to tight on his neck on one side. He isn't too small according to the product information. Any tips?
Posted by Noelle MacGregor at 9:46 PM

Hey bro, adjust the straps along the top rail. If you look at the pictures, they are not spaced evenly, making the crotchfruit slump to the right, pressing his neck against the strap. Spread em out evenly and it should be a better ride for the squirt.

And, next time you're in Austin (hint, hint), I know a great tea place we can go to. I'm not an ice tea drinker, but after having 2 different flavors of theirs, I'm convinced.