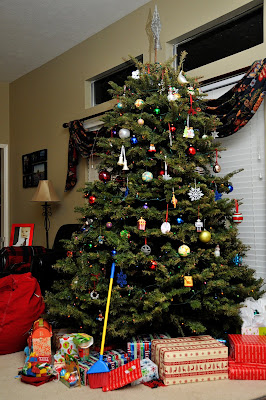 Jackson really had a great time this Christmas. Leading up to Christmas he fell in love with everything Christmas (except Santa's lap) from lights to Santa to Jingle Bells to Ho Ho Ho.
Here's Jackson on Christmas morning. Santa brought him a broom since he loves using the real broom in the backyard. It was a hit! 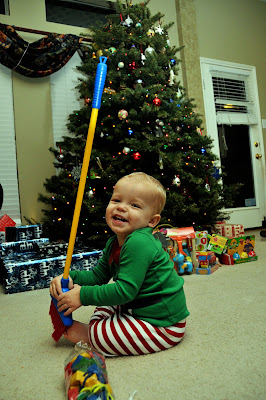 The puppies got cute squeaky animals that were major hits...for about 10 minutes. They haven't touched them since. Ruffles got a duck. 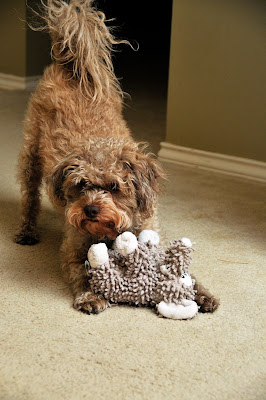 After we had a nuclear Christmas morning, Grandma and Granddad Stockman and Uncle Stephen came over and Jackson continued to get spoiled. Here is his pile of gifts. He slowly opened the presents and took each scrap of paper to someone. 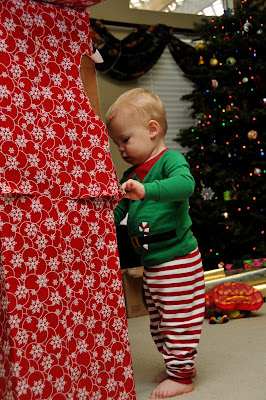 Mom and Dad got Jackson a baby boy doll so he could practice being a big brother. So far so good. On Christmas morning he fed the baby and gave him hugs and kisses. When we got home today he began asking about where his baby was. He fed him again, patted him saying, "gentle" and cried when we took him out of the room. Unfortunately, he also likes to poke the baby's eyes. Hopefully we can break him of that before the real baby is born. 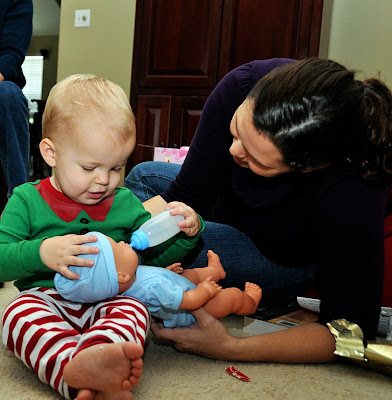 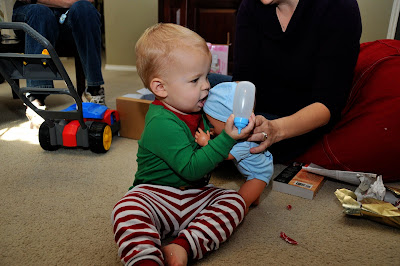 Mid-afternoon we headed to Grandma and Granddad MacGregor's house for a third Christmas. Although we missed the Morris family, we had a nice time with everyone else. Jackson had fun all day long and was totally wired by the end of the night. 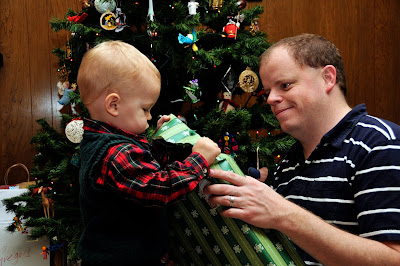 Penny - this picture is for you... 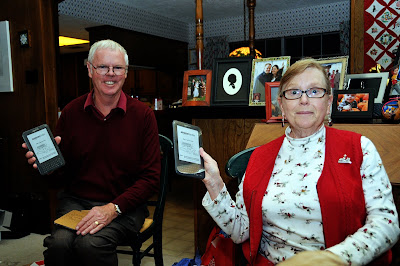 Posted by Noelle MacGregor at 10:44 PM

Never knew a broom could make a kid SO happy - adorable pic!!

We love our Kindles! Thanks Rob, Noelle, Jackson. Penny, Stephen, William and Neil.

That last pic is great... good look on your face Mom! :) My kids are broom obsessed too and I had to get each of them a swiffer so that I could swiffer without them bothering me. Do you think it will continue into the teenage years?? I don't!!

I love the pic of J holding the baby. So sweet. He'll be a great big brother.