Yesterday Jackson had his photo session. It was supposed to be for his 6 mo birthday/Christmas, but he was sick and it got postponed. It worked out well though because he's now an expert sitter, which makes photographing him much easier. Jackson did such a great job and smiled almost the whole time. Poor little man - got so cold - that at the end his hands were clinched in fists of freezing and were shaking. We had to call it a day after that, but Cathy Noble got plenty of great shots. Since one of them will be our Christmas card, we'll just share this one with you. 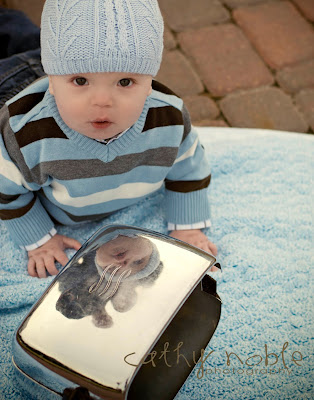 Posted by Noelle MacGregor at 8:20 AM

Aww! I love him, his outfit and the picture! Can't wait to see more!

Lovely photo - great to see he's keeping up the family tradition - is it only shiny toasters?

I love this photo so so much!