Today begins July, meaning Summer is at its halfway point. Part of me is freaking out about the fact that only a month remains - schoolwork to do, novels to read, housework to complete, Jackson at daycare to prepare for, and sunburns and scars to acquire - but the other part of me appreciates that it has been a month of no real job to do beyond new fathering. I've forgotten what the date is and what day of the week it is. I haven't woken up before eight without going back to sleep as soon as possible. I have the daytime TV schedule down - 10 = TPIR, 11 = News, 12 = Family Feud, 1 = Trivial Pursuit, 2 = Time to get out of funk and move away from TV. I know when ABC plays my favorite summer show, Wipeout - 7 on Wednesdays, Sunday and Saturday afternoons sporadically. (Tonight's episode has our cousin Michael's new wife, Shannon, as a contestant! Welcome to the family and know we are forever jealous!) We've begun rewatching about five How I Met Your Mother episodes at a time. The grill is used about four times a week, the dogs are always happy, the lawn is getting watered, I am about five minutes away from liberating Hyrule again, and yesterday Rob made it through the entire day without going outside at all. It's Summertime alright, and I am very relaxed.

Noelle is not so lucky. She is about a month away from her Masters, and the classload this Summer is insane. She always has something to read, something to write, somewhere to be. Her job at school is also constantly dragging her back to the office. She has done a lot of work this past year to make our school run better, and she has to make sure this Summer is not a reset button for that work. All she wants is time with the boy, but if you know Noelle, you know she is always working towards a better future while handling a challenging present with grace. She's the most amazing person I know, by the way.

The stressful part of the past month has been dealing with sick Jackson the past week. His congestion makes him fussy and wheezy, and sleeping in his pack and play became impossible because of the awful sounds he would make. Noelle sacrificed so much of her sleep to ensure he slept okay, and it's a constant worry for her. Last night, he finally was able to sleep in the Pack and Play for about seven or eight hours, meaning we got some good sleep finally! (Rob dreamed about working on a high school project with his old friend who is returning to Houston after a few years in Canada, and then dreamed Noelle's friend in New York called to say she was pregnant. He had to be convinced the second dream did not happen.) Jackson went to the doctor today for his two month check-up and shots, and things look like they'll be better very soon, but more on that later.

So, based on the details above, you would think very little productive is going on for Rob. Not true - Rob is stuck looking at the past and the future concurrently, trying to figure out how to deal with the present. First off, Stephen lent Rob a great tool that allows Rob to upload videos to the computer. Anyone on Facebook should know that all sorts of videos are being posted from Rob's days in high school, where apparently Rob could bring a video camera anywhere. Unfortunately, Rob narrates almost every video, so there is a whole lot of cringing at the director's commentary. But what's worse is comparing Rob Then to the high school students Rob teaches now. I feel like there are a lot of people to apologize to for being jerky. I imagine I would be very frustrated if I had a student like me. That makes me look at Present Rob a lot and try to figure out what bad habits I still have. (Plenty, by the way.) Then there's the love I had for creating these awful spy movies and ridiculous skits, and I wonder what happened to Rob Then's ambition. Then there's those friends I've lost touch with or don't get to see too often, and I look at how important they were to me then, and wonder how the years got us so far apart. Then there's the subtext I missed then, not realizing what people were really saying to me, and I wonder how I was so ignorant and oblivious, and then I wonder what I still miss. Then there's just the painful awkwardness that makes me thank Noelle for marrying me.

So it's a Summer of Navel-Gazing, I guess. The Ghost of Videos Past has given me a lot to think about, and Jackson is that big reminder of what's to come. I already know big changes are coming next year at school - I no longer have my own classroom, I have an office. As I move all of those boxes of classroom material, there's the question - will I ever use any of this again? Will I ever be a full-time teacher again? Is that what I want? What will make it so I can be the dad I want to be? How will we ever get this kid off to college? What videos will he want to watch of his life?

So, this past Sunday morning, after our Third Annual MacGregor Picnic in the Park (which was actually held at the house where there is AC), Noelle needed more sleep, so Jackson and I got up early. As I often do on mornings after gatherings, I was craving a Whataburger, so I decided to take Jackson on a secret father-son trip to get that greasy burger. After I got it and enjoyed it, I just drove for about an hour with Jackson, out to the farms near Brookshire and Orchard. I kept wanting to pull over and take pictures of Jackson with cows and by the silly signs of Rosenberg and Richmond, but the idea of hoisting his car seat up for pictures seemed ridiculous and cruel, being as outside it was hot and bright. I had to chalk a lot of those urges up to "someday, son", knowing he would appreciate this world I wanted to introduce to him in a few more months or years. Then he started going nuts and we were about forty miles from the house where his food was, and there's only so much consoling that can be done from the front seat, so we headed home very quickly with me apologizing every ten seconds until he fell back asleep.

I guess that's the Summer - a lot of resting up, looking back at the previous year and years, and waiting for the next year's adventures to begin. Every previous summer has been about school in some way, but this one is all about being a dad and Jackson being our son. 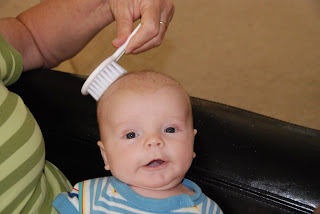 Posted by Rob MacGregor at 2:55 PM

Rob (& Noelle), thank you so much for these posts. It's hard to keep up with everything going on with everyone sometimes and reading this really makes my day. Oh - and by the way - if "Noelle's friend in NY" was me, that was in fact just a dream - but I literally laughed out loud in my office at work.

You are awesome, Rob!