On this day in 2007, Noelle and Rob said their "I do's" in Austin. There are a million reasons why the past two years have been the best in my life, but one thing that has made these 731 days be so "happily ever after" would have to be the games. We play our Sorry games, we get competitive over bowling, we like to take on Joe and Shannon at Spades, and we have had our cribbage phases, but it's Rummy we have spent the most sizable portion of the past two years (really, the past five years) playing.

This is a game Rob's family has been playing for decades, and Noelle took to it with her usual analytical and competitive skills. There have been hundreds, maybe thousands of games, with the end result being close to neck and neck between us. So we managed to get two games in today, thanks to Grandma watching Jackson this morning, and there were no pens around during the second game, so we took the score down here:

That game ends up being a win for Rob, by the way. I can't remember how the game this morning turned out.... hmmm....

Anyway, the thing is, even though Noelle has kicked my butt for years at all sorts of games, I've been feeling like a winner for two years now. I love you, Noelle. Happy Anniversary.

Sorry for those of you looking for Jackson pics - he was just a twinkle in our eyes here. 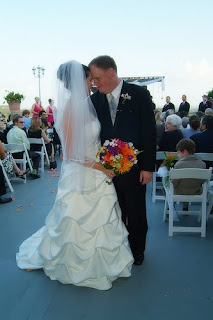 No need to apologize! Looking at Jackson is looking at love - just like the photo of you two here. :) Congratulations, guys!