Today, we ventured out to go to the doctor and work at school. The doctor said Noelle could swim again, school said here is paperwork to swim in. In between, we met up with two other MacGregors, Uncle Chris and Cousin Colin! This was Colin's first chance to meet Jackson, who was basically comatose. Here's the pic: 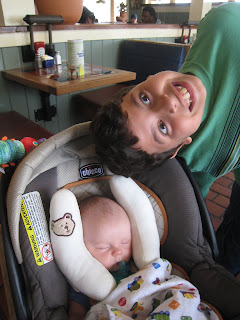 Colin dazzled us with his usual imaginative chatter about flying beanies and his plans for the future. He was excited to meet the only other MacGregor cousin of his generation, even though he was asleep the whole time.

Chris told us more about his upcoming wedding plans, which you can read up on here if you are so inclined. He and Melissa have most of the wedding planned, but still have some major bits to take care of. He was glad the celebrant was easily taken care of - Reverend Rob is performing the ceremony, which means he'll have married both of his siblings.

Rob wants to tell the world that he takes back almost all of his harsh reviews of Chili's, being as he discovered you can replace a burger with a grilled portobello mushroom now. That's good healthy eating!
Posted by Rob MacGregor at 11:43 PM