About a month ago, a mother told me she couldn't wait for her baby to be Jackson's age so she could just put him in the crib and he'd fall asleep. I laughed and said, oh Jackson doesn't do that. Then, she went on to tell me how last time she was there, they put Jackson in his crib and he just fell asleep. Interesting...

Now that Jackson is in the "Cuddler" Room at daycare his naps have been more consistent. Although he rarely napped for us for more than 45 mins over the Winter Break, at daycare he seems to nap at least 3 hours a day. Generally he goes down from 9:30-11:00 and then 1:30-3:00. Well, since he seems to do it at daycare without any issues, I decided that this weekend I was going to put him down at those times and just leave him and hope for the best.

Saturday at 9:30. We put Jackson down. He babbles to himself for about five minutes and then there's silence. I go in and check a bit later and he's asleep. He slept for about 55 minutes.

Saturday at 1:30. We put Jackson down. He cries and cries for a few minutes. I go in and reassure him. He goes to sleep minutes later. He slept for about two hours!

Sunday at 9:30. We put Jackson down. We never heard anything from him. I check on him a few minutes later and he's asleep. 30 minutes later Jackson wakes up coughing. Then, he starts crying. I go in there and he's wide awake. I tell him it's time to go back to sleep. I roll him over (he's crawling around his crib) and put him back down. I leave him. Rob asks if he's going to go back to sleep and I laugh and say, "I don't think so. He's wide awake." But, then.... there's silence. We hear nothing. I'm shocked and amazed. Wow. We really have this figured out now. This is amazing. Rob goes in there a few minutes later to check on his. This is what we found... 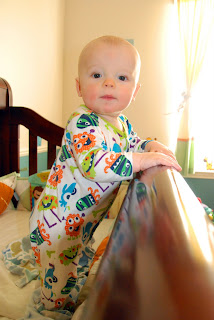 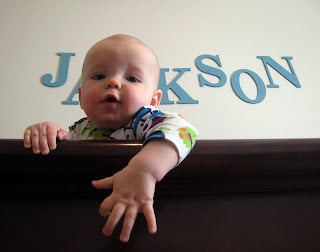 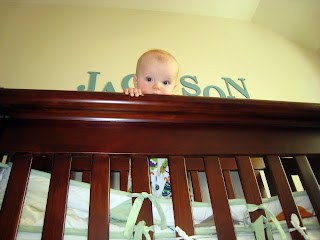 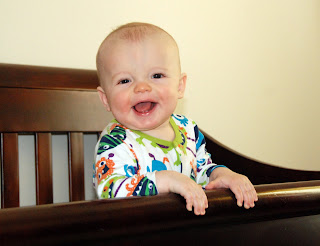 Bye bye bumpers.
Posted by Noelle MacGregor at 11:09 AM

uh oh! He's a big boy now! Love that he is sleeping better for you now

Before you know it you will be trying to just keep him in his room, much less his bed... enjoy, take it all in, it goes fast.

Yeah.. so glad the naps were working! I knew he could do it at home too! Having a set time knowing you can relax is so nice too!!!!! Reading this made me think that I need to get rid of Neil's bumper too. I have kept it on too long because the end of the bumper means my baby is growing up... sniff sniff.