Tuesday - Rob is sick. In the morning before Noelle leaves, Rob discovers someone left the gate open and the dogs are gone. For those that don't know, that's how we got Ruffles. He ended up at a shelter because he got loose somehow. Luckily we found them. Noelle leaves without Rob because he decided to just go to school for his 3 classes and go to the dr in between. Jackson has an explosion in his diaper on the way to daycare. Noelle gets a call right before the admin meeting that Rob's car won't start. Despite a neighbor's attempt to jump it, it still won't start. Noelle drives home, gets, Rob, waits an hour and a half at the doctor with him, and then drives him back to school. During the wait at the dr Noelle starts to feel sick. That night Noelle's fever reaches 102.5 and she is miserable.
Wednesday - Noelle stays home from school. Her doctor works her in. Now both Noelle and Rob are on antibiotics.
Thursday - Noelle stabs herself with a fork. Yes, that's right, Noelle stabs herself with a fork. She dropped her fork and quickly went to catch it, but the booth stopped the fork, while her hand kept going. It went through her finger where it joins with the hand and although it didn't break skin on the other side, it actually went through all her muscle and bulged through to the other side. Lovely. Needless to say, Rob's first normal meal ended before it began and tomorrow might involve our 3rd doctor's visit this week.
Enjoy some pictures of Jackson. 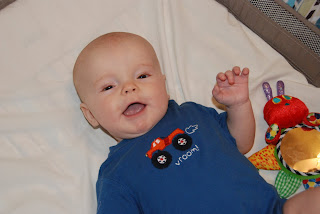 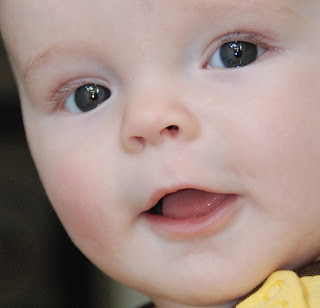 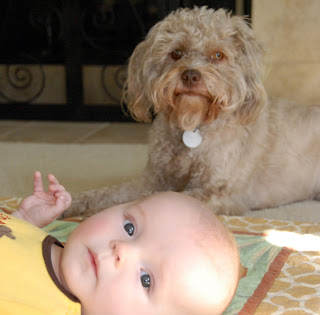 Posted by Noelle MacGregor at 8:23 PM

Oh My God, Noelle!! I hope the antibiotic you are taking works for the bacteria you got shoved into your finger/hand... I can't imagine the pain. I can take you to the Dr if you decide to go.
These are excellent photos of Jackson, and I really like the last 2 and the center one is the BEST! His cheeks are flushed a little and the eyes...wow.. and his dimple is about to show.. cute is right!

That's crazy about your hand Noelle.

Ack! What a week!

Y'all are so great to throw in pics of Jackson with an update like that. ;)

Yes! We found the dogs. Luckily they stayed together. I think they went to play at the park (their usual first destination) and were on their way back when we located them. Good thing they got the extra running in because it's been raining every since and they haven't had much.

The hand is okay. It hurts, but could be worse. Though, watched a fork pierce through your hand is one of the weirdest experiences I have ever had. Not going to the dr unless it gets worse.

I love the 2nd pic too. Jackson's eyes are always so shiny.

Goodness! I am trying to picture the fork incident and can't wrap my mind around what actually happened. Jackson has the sweetest face - do you know what color his eyes are leaning towards?

I love the second picture! I cannot believe the story about the fork... that sounds so painful!! It is also one of the strangest stories I have heard in a long time!! Hope it heals okay!! See you guys soon!!

Hee-bee-gee-bees (fork in hand..so...gross). Sounds like the WORST week! Get some rest, sickos.