Our First Moment of "Panic"

We had our routine check up on Earth Day (4/22). We also had our first moment of panic. Rob almost didn't join Noelle at the appointment, since it was earlier in the day and required him to find someone to cover a long class period. The appointment started out business as usual. Noelle did notice her blood pressure was high after the nurse entered it into the computer. We dismissed it and figured it was a fluke and just had to do with stress from the day. When her doctor came in and took her blood pressure again, we thought it was concerning. She didn't say anything about it and finished the exam as usual. Then, she told us she was a little concerned because Noelle had several warning signs of preeclampisa. As you can read - it's very dangerous to the unborn baby and the mother. She told us we needed to check into Labor and Delivery and that if the tests showed preeclampisa we would have to deliver the baby that night. Although we both know, the baby will come when he comes - we were NOT ready. We also (thank goodness) didn't know at the time how deadly it could be. 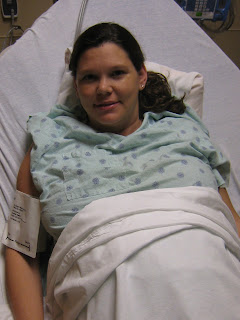 We got to the Labor and Delivery area and checked in. Our maternity tour wasn't until the following Saturday, but we got the sneak peek. We were at the hospital for about four hours, during which Noelle had her blood pressure taken every four minutes, a bunch of tests run, and a super-long ultrasound. Although Noelle’s blood pressure was still high (usually it's 115/72ish and instead it got as high as 160/90), the other tests came back okay, so we were able to leave. We also learned that our baby at 37 weeks is a big baby and already measure 7 pounds 11 ounces with two and a half weeks to go. Oh boy! He's a big boy! Rob is forever grateful to Noelle for carrying and eventually delivering this big boy!
Tator Tot is still inside Noelle, her ankles are still swollen like godzilla feet, but we are now closer to being ready for the boy. We're very lucky that everything worked out and both Noelle and Tator Tot are okay. Rob doesn't even want to think about life without either one.
Posted by Noelle MacGregor at 5:22 PM

Thank goodness everything is ok! Can't wait to meet Tator Tot though

I think this means Noelle needs to relax and put her feet up for the duration. :)

Noelle is working from home part of the week - so hopefully that will help. Our next appointment is today.