This past weekend, we ventured up to Austin for the 25th Annual MS 150. Noelle went in comfort with Rob's parents, Rob went in discomfort on his bike. It's Rob's fourth time to ride, but he had a feeling it would be the worst, due to his lack of training. He was scared heading in.
When we saw that the weather was going to be bad Saturday, Rob was wondering if this would be his escape from the grueling bike ride. When he asked a co-worker if he planned on skipping it if it was rainy, he was told, "Yeah, it's going to suck, but it's the kind of adventure you'll want to tell your son about someday."

That sealed it. Rain or shine, Rob was in.

Well, it rained so hard Friday and Saturday that they cancelled day one of the ride, from Houston to La Grange. Some idiots went ahead and rode anyway, through the downpour and the tornadoes that flooded a good deal of West Texas. Rob was not one of those idiots. He played cards with Noelle and his parents and had a nice lunch, instead. The moral to that part of the story, son, is to know when an adventure is just plain stupid and dangerous.

But Sunday was on, and Rob headed out with his friend Jess to La Grange, to go the sixty-five hilly miles to Austin. He got on his mountain bike and started riding and quickly realized that the lack of training and the wind in his face and the hills and the breakfast kolache were all conspiring to make this a difficult trip. Jess zoomed ahead, and Rob sweated out each hill, going through all eighteen gears on his bike.

It was a long trip. At one point, Rob's allergies almost got the best of him. See, as much as we love Austin, Rob can not touch any plants there or the allergies go haywire. It's a big mess. On Rob's second MS150, one of his eyes actually sealed shut due to the irritation. It was gross. Around mile forty-five, Rob could not keep his eyes open and his muscles were cramping. He was very afraid that this ride might end up like his second. He was thinking about you, son, to keep him going, but eventually he had to flag down a ride and get to the next rest stop to clean out his eyes.

That was tough. So much of the ride he had focused on creating this story of Dad persevering and being awesome to fill his son with awe and admitration. When he pulled over and let the Sag Wagon pick him up, he felt he was letting his son down. But once he got his eyes washed out, he got back on the bike and started riding again. And he kept on riding, slowly, until he made it to Austin to see his parents, his friends, his wife, and his son (in womb) cheering him on.

The lesson I want our son to take from it is to not let setbacks slow him down. Bad things will happen, but if you let it defeat you, you're defeated. The only way I made it to Austin is because my heart wanted me to do it, for the people waiting and myself and the people afflicted with MS, but especially because I want to be a dad our son will look up to. But I'm not perfect, nor am I in shape, apparently, nor can my allergies handle the beauties of nature, and all of that is okay. I'm human, I have setbacks, I have weaknesses, but if we put our hearts into doing something, we're going to do it, no matter how long it takes. Of course, having a Noelle waiting at the finish line that believes in me was a big help, and I know it will be the same for our son.

Speaking of finish line, we're getting a few weeks away from meeting/delivering/naming our little Tater-Tot. I look forward to helping Noelle over that finish line. And next time I ride the MS150, I will request an epidural.

Thanks to everyone who supported us this weekend. It was quite an adventure that you helped make possible. 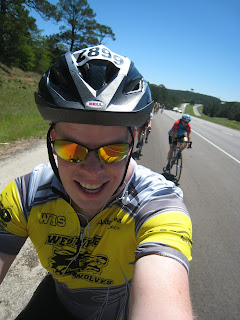 Here's me at the top of the killer hill outside Bastrop. I didn't walk up a single hill, and now I ache.

And from now on, I won't try and write third person narratives on here.
Posted by Rob MacGregor at 9:13 AM

Hi, thanks for making me get all teary when I'm on the road. Damn you and your sweet story.