Jackson's Morning of Terror at the Fire Station

Jackson loves firetrucks! We read books about firetrucks. He points them out on the street. He talks about lights and sirens. He loves them so much, I decided to take a half day at work so I could take him to a fire station tour with our summer playgroup. When I told him about it, he couldn't stop talking about it. His conversations revolved around fire station, firetruck, siren, lights, etc. After our little outing today, I learned that he likes pictures of firetrucks and real ones when they are not near him. He's always hated loud sirens and the fact that it's coming from a firetruck doesn't change that. Yes, I have to admit, firemen can look scary (see first photo below), but Jackson was beyond freaked out by them and the trucks. I don't know if I have ever seen him so freaked out. 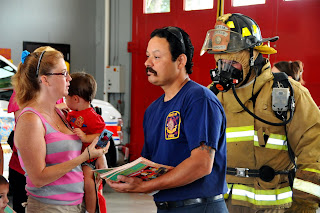 He spent almost the entire visit looking like this... (or with his face buried on my shoulder or leg). 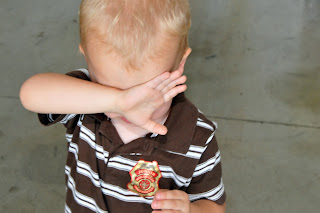 Instead of a pole, they had a slide. Kind of neat. But, the fireman said they don't use it. That's disappointing. 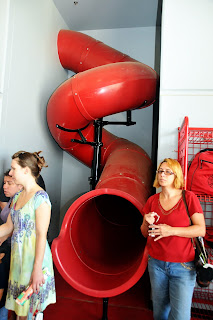 This is the one thing I convinced Jackson to do. It was away from the firetrucks and involved water. 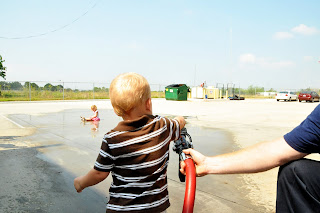 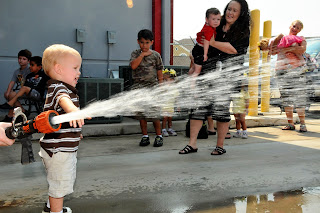 Here are the other kiddos having fun and posing for a picture with the firetruck. After this, we left because when I looked up from taking this picture, he was halfway to the car. 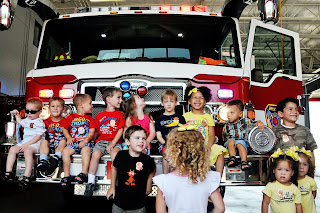 I had to go back to work, but on the way we made a quick stop for lunch. By this point, he was mostly recovered from the scary visit where the "sirens make Jackson sad." Then... 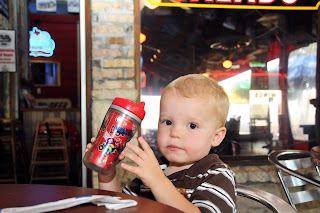 ...this was parked in front of our car. Poor kid didn't want to go near our car because of the truck. 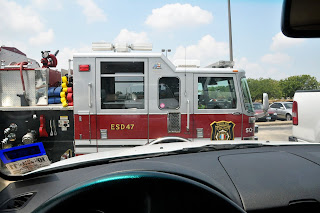 So, what was supposed to be a fun morning for us, turned into a morning of terror. But, it was quickly forgotten and the day was much more fun for him from there on out. I'm okay with him not wanting to be a fireman.
Posted by Rob MacGregor at 10:27 PM