We finally broke down and cut Jackson's hair. The little blond curls were supercute when they curled just right. But, when they didn't his hair was just craziness. 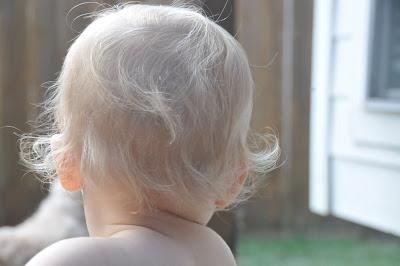 The main reason I broke down and agreed to it was because he getting a little too mullet-ie. We are opposed to having a Mullet MacGregor. 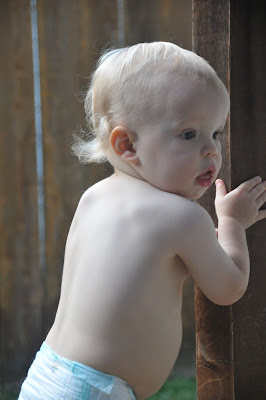 At first he was a little freaked by the noies of the clippers. We showed him that Daddy liked it on his head and after that Jackson was fine with it. 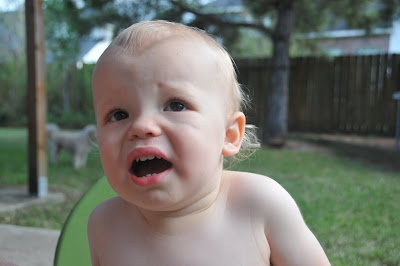 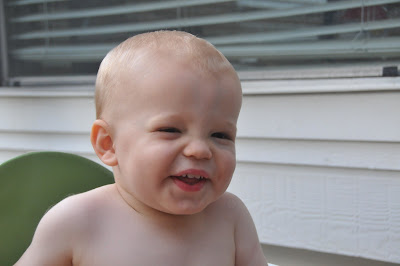 Post-hair cut, "You should see the other guy" look. His eye is looking much better than we expected it to today. He hit the corner of the coffee table yesterday, but the bruising is pretty light and didn't spread much. 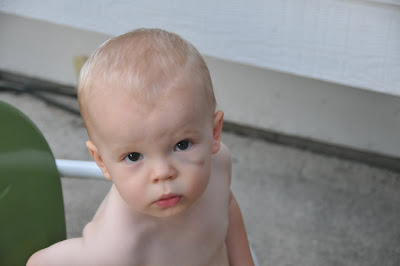 This weekend Jackson also went to his friend Thomas's first birthday party. He had a lot of fun and looks forward to spending more time with his future bestfriend. One funny moment at the party took place in the kitchen. He was finally warming up to people when he got a little out of his comfort zone. He whipped around to hide his face in Daddy's legs. A moment later he looked up and realized he had grabbed the wrong legs! He quickly corrected that problem. It was also a house that had the stove dials on the front, much like his play kitchen. Keeping him away from the stove was quite a challenge.

Finally, we all want to wish a Happy Birthday to Aunt Lori! We hope she had a great day!
Posted by Noelle MacGregor at 6:51 PM

His haircut looks so cute!! The advantage of short is it is so easy to maintain!

Aww! He looks so much older! Looking forward to having boys with short hair instead of 2 more girls with rat nests
-Shannon