First of all - Jackson says, "Happy Birthday Uncle Joseph! We love you and miss you!" 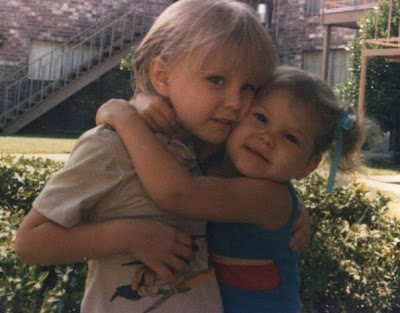 We have been having some trouble with Jackson napping at daycare. Towards the end of his time there, they started not putting him down for a nap if he didn't "look tired." Dude, he's 1. He needs to nap! This means we've been having some trouble with him at home now, too. So, we are working really hard on tiring him out and then putting him down for a nap. We were able to get him to fall asleep both times today, but he didn't nap long enough. Before the first nap, we took a walk to the park. It was not even 9am and it was miserably hot and humid already. Welcome summer. Despite that, Jackson had fun. 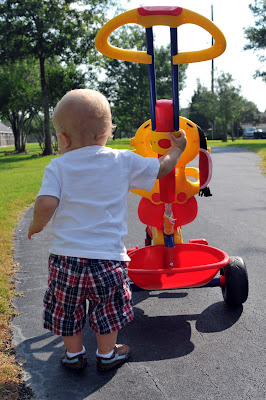 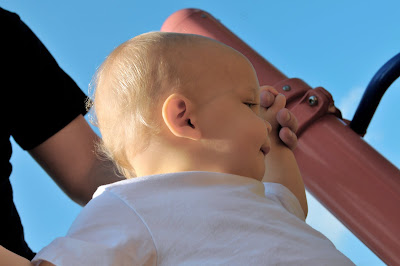 Before nap number 2, we took him to one of the splash pads in our neighborhood. Jackson had a blast until he noticed the playground. Then, he was done with the water. Unfortunately, the playground was too hot to let him do too much on it.

Later Grandma and Uncle Stephen came over for some burgers. Jackson had some fun on the trampoline with Uncle Stephen. 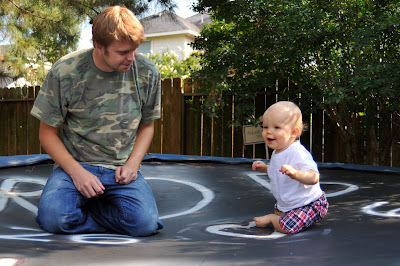 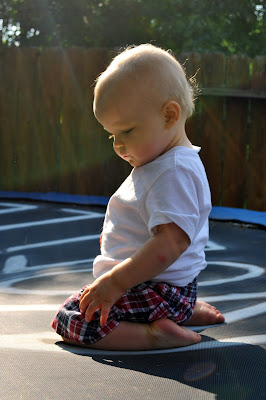 Posted by Noelle MacGregor at 9:33 PM

I LOVE those shorts on him!

He is so stinking cute!

As for the nap situation, he's probably ready to transition to just one nap a day now. Most kids go to one nap around the time they turn one, so he's at about that age. And if he's fighting it, it will probably be much easier to switch over to one and get him down easily. You might give that a try and see if it works better.