Swine Flu - I hate you

My poor little Jackson. We are so ready for him to feel better. He finished his antibiotics on Friday. Friday night we got to San Antonio and Jackson had a 103.7 fever...lovely. It went away over the course of a few hours with some Tylenol and was completely gone in the morning. He seemed okay over the weekend, but didn't sleep well on Saturday night. This morning he was unusually fussy and sleepy. We figured he just didn't sleep well again and was just really tired.

Around noon Noelle received a call from his school that he had a 102 fever and needed to be picked up. After some major coordination, Noelle picked Jackson up, brought him to Westside's parking lot, Rob drove him home to meet Grandma Stockman, Noelle borrowed Niki's car to go to a recruiting meeting, Rob returned to school and taught 7th period, Noelle returned to school and gave Niki her car back, then we drove to the doctor's office to meet Grandma Stockman and Jackson. While Jackson was at home his fever got up to 103.4 and he wanted to be held the whole time.

The past two visits, Jackson has seen other doctors. We liked them, but were glad to have our doctor back. He looked at Jackson... One ear looked better, but one still looked awful. Keep in mind this is AFTER 15 days of antibiotics. He also thought he might have the flu, so he gave him a test. The last doctor wouldn't test him because she said she couldn't do anything for him since he's not one yet. Jackson tested positive for the flu. We're glad our doctor did test him and now we wonder if he also had it 2 weeks ago.

Dr. Gonzales gave him an antibiotic shot for his ear infection. He has to go back tomorrow and the next day for another one and so Dr. Gonzales can check on him and make sure he's doing okay. Since Swine Flu is the worst for babies and the elderly, he wants to be careful.

Say some prayers that little J is better soon. Despite being sick, Jackson has maintained a fairly decent attitude. He was clingy during the day, but actually played a little bit tonight.

Emily and Maddie were nice enough to share their walker and Jackson LOVES it. It allows him to come to us and to go after his dogs. We hope that Jackson did not reciprocate by leaving them with H1N1. 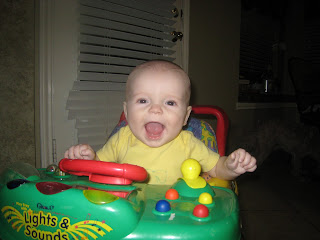 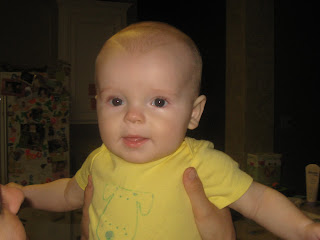 The face of Swine Flu
Posted by Noelle MacGregor at 8:10 PM

Look at Jackson on the move!! Lots of prayers for you guys!

Wow he seems so much older in the walker! And he's mastered it in just a few days

Poor Jackson. What a horrible stretch he has had with illness. I hope he recovers quickly and I'm so glad the doc is watching him so closely.