Today Jackson went in for his second antibiotic shot. Even though he didn't have an appointment, Dr. Gonzales told us to ask the nurse to get him when he arrived for his shot. He checked him out - listened to his lungs (typically when an infant dies from flu it's related to respiratory issues) and said he seems to be doing really well, as things considered.

We weren't fans of the nurse, though. The nurse Jackson usually has administered his shot yesterday. She was very gentle and slowly injected him. It's a lot of medicine for such a little leg. He cried for about 10 seconds and then was fine. It didn't get red and he didn't get a knot. Today's nurse pushed the whole amount in at the same time. Jackson screamed and cried for quit a while. Jackson now has a big knot on his leg. Poor little guy.

Below are some pictures of our swine flu/ear infection baby. He's still as cute as can be. 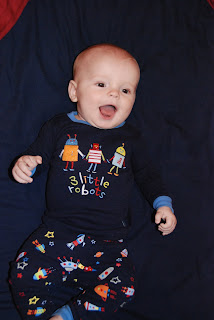 Swine flu, you better watch out - Jackson is going to get you 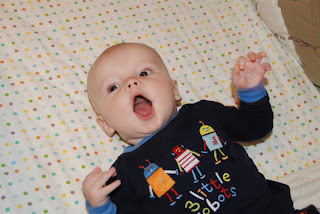 Posted by Noelle MacGregor at 9:19 PM

OH MY! Lots of prayers and get well wishes for the little man!