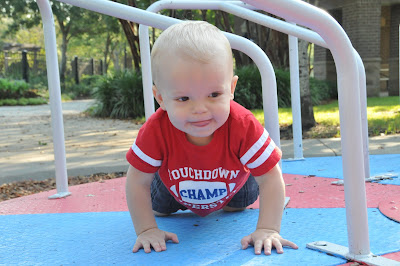 These are pictures of Jackson having fun at the park before the evil slide. 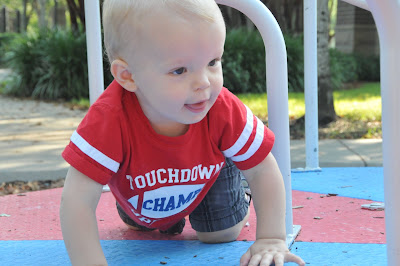 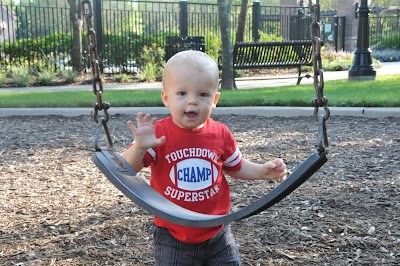 This is the evil slide. 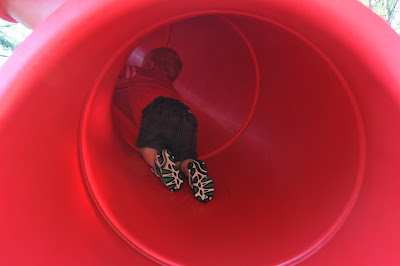 After crawling up the slide, Jackson wanted to go down the curly slide face first alone. Mommy decided it would be safer if she went down with him. They went down the curly slide a few times and Jackson had a blast. Then, he wanted to go down the evil slide face first alone. Once again, Mommy decided to go down it with him so it would be safer. The slide was much smaller and faster than anticipated. Poor Jackson got banged up on the way down and his feet caught the sides a couple of times. We thought he'd be okay, but after he finally calmed down he still wouldn't put weight on his leg.

We ended up taking him to the ER for an x-ray. After sitting there for 4 hours, we learned it wasn't broken, but the doctor (who was the nicest ER doctor I've ever seen) thinks he damaged the ligaments or cartilage in his left knee. But, at his age the doctor didn't know what they would do. He didn't think they would operate at his age. So, now we have to take him to a specialist on Tuesday.

While we were there, we got to experience the bright spot of Katy. I know this type of things happens elsewhere, we haven't ever seen anything like this in Katy. A trashy, trashy man came limping out of his room. A nurse asked where he was going and he said out to smoke. She explained that he couldn't because it's a non-smoking campus. He said he didn't care (with slightly different words) and went out. Blood was seeping through the thick, white towel wrapped around his foot. He went anyway. When he came back all hell broke lose. He was told he was discharged and would have to check in again if he wanted to have his foot treated or receive pain medication. He went nuts, cussing, yelling, screaming and shoving. Poor Jackson got scared and started crying. We overheard he got shot in the foot. Interesting... They had to chase them down in the parking lot to get them to sign some paperwork.

Jackson is sleeping right now. We hope he wakes up and can suddenly put weight on his leg.
Posted by Noelle MacGregor at 3:25 PM

Well, this sounds like a horrifically bad day. Happy Birthday to your Mom, although it does not sound very happy.

That is what happened to Logan's mother.. but she made a ton of money from the 'fun complex' and moved to the Woodlands.

At least it isn't broken. I have a friend who went down the slide with her son when he was 2 and he broke his leg. Something called a spiral fracture that is common with slides. I hope you get good news from the specialist tomorrow.

A day later and he still won't use the leg. He just tried standing up but then fell over into my lap. He's not in constant pain at least.

The evil slide is a replacement slide for the original one that was destroyed by punk teenagers. I blame their parents for everything.