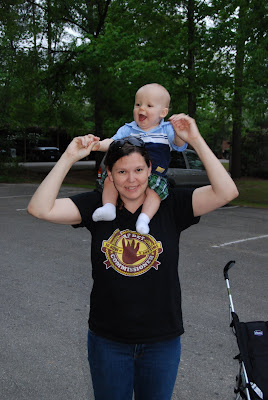 It's midnight and I want to sleep. But, I am waiting for something in the dryer that I don't want to wrinkle. I am going to take a break for a moment to tell a few stories.

1. Jackson has a little friend, Erwan. Jackson is 1.5 months younger and they have been in the same class the whole time, minus about a week of two when he moved up to room 2 before Jackson did. They look a lot alike. There are some difference in the face, but that's mostly it. From behind they are pretty similar. On Friday, they were playing together and someone actually asked us if they were our twins. Anyway, we were told that when they take the kids outside to play that Erwan and Jackson race each other using the walkers. It really entertains me to think about my 11 mo old already being competitive.

2. We were told at daycare that Jackson might be a skilled basketball player. Your first instinct might be to guess it's because he's tall for his age. You'd be wrong. It's because he guards his food. They said when he's eating, if another child comes near his food, he sticks out his arm to block them from getting too close to his food.

3. Jackson now loves having his shoes on. He used to throw a fit and pull them off. At daycare, they only make him wear them when it's time to go outside. For the past two mornings, Jackson has crawled around, located his shoes, brought them to me, and tried to put them on. I think that he thinks if he puts his shoes on, I will take him outside to play. At 6:00 am it's not going to happen...

The picture has nothing to do with any of this, but I do love my little man.
Posted by Noelle MacGregor at 12:02 AM

Its hard to believe its been almost a year! Its also hard to imagine there is another child in his class that might be as cute as him!!!

I'd sat #1 and #2 are strong indications that he is without doubt Noelle's child! lol.

I love the food guarding. It will serve him well when he visits us.