As I've said earlier, I want Jackson to have more than the birthday experience. I want to take notice whenever an anniversary day like today goes by as well. I've been talking to Noelle about this 100th day appreciation since Day 1, and I've been talking to anyone who will humor me about having the biggest party of your life on Day 10,000. So far, Hallmark has not responded, so I guess it's just a me thing.
So I wanted today to be a special day for the little guy, but instead it might be my one of my least favorite days of his life so far, right up there with the late night hospital trip and the "No Insurance" discovery day.
So, son, when you get to read this, here's how your 100th day went, and here's how it changed things.
First off, I woke up from my first school year nightmare at 5:30. Every summer seems to conclude with me having panic dreams about me in a classroom with no control over my students, and this year's adapted to include my anxiety about my curriculum and my new position as an Instructional Coach. It sucked, so I woke up, and then there was the realization that it was pretty much time to wake up.
So I went back to sleep regardless. Noelle heard Jackson stirring around 6, and dispatched me to help him ease back into sleep, being as she had been up with him around 2. As I waked over, it dawned on us - it was time to get moving. We fed Jackson and got ready for the day, though it was definitely slow-moving for me. Just when we had everything packed for Day 1 of day care and had the dogs in their kennels, we realized that we hadn't fed the dogs. We put the food and water bowl in their kennel, which convinced them we would be gone for a long time, so they started whining as we left, which never happens. Usually, going to "their home" happens as easily as this.

Today they whined about us leaving them. That was rough to hear.

Then we get Jackson to his day care and got him all checked in. There was a crib with his name on it, and the teacher we met seemed very nice. Here he was, checking things out. 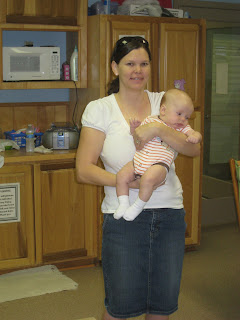 In the morning, the infants' rooms are combined as people checked in, which meant Jackson was sharing the room with older crawlers. Before we left, we watched through the window as an older baby got uncomfortably close to our baby. That was rough to watch.

But he needs that interaction, we know. And he's in very capable hands, we know/hope. So we headed out to go to school, and as I waited to make a turn, I looked in the rear view mirror. There, reflected in Jackson's little mirror, was the empty car seat. We've gone places without Jackson before, but never anywhere with an empty car seat being as he is still carried around in his car seat. Seeing it empty reminded me we had left him somewhere. That was so rough to see.

At school, people invariably asked us about Jackson. Every mother who had ever left a child in day care asked Noelle how she was doing, which is really not helping the situation for anyone. Everyone take note - just assume the mom is sad. You don't need to verify it. Of course, when people talked to me, they only said how hard it must be for Noelle. I guess they don't realize I'm one of those softy sensitive men who doesn't mind emoting, and I shouldn't feel slighted, but I missed him too. Anyway, long story short - rough day.

Here's the worst part though. My new position means I no longer have my own classroom, so one of my tasks today was to finish dismantling my classroom. I've taught in that room for three years now, and that was three years worth of posters and cards and projects and journals and pictures that I had to now box up or throw away. Here's a picture of my room as it was last year, when my students all put their heads down simultaneously on April Fools. 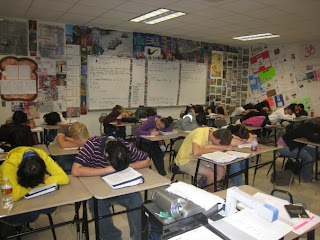 It's a busy room, apart from the comatose students.

And I realized at five to 3 that I had hours of work ahead, but it was almost time to go. Some new teacher had been waiting for his chance to move into the room. I could not make him wait another day. I would have to finish it today. So I told Noelle that once we got Jackson home, I would have to go back to school to finish my work.
Noelle has been an English Teacher Widow before. I have spent many nights working away at school, grading papers and entering grades, and her efficient, organized habits keep her from having to do the same. But to do it today was the worst. Jackson was out of wack from the new experience, and, as I've repeated not-so-inconspicuously above, it had been a rough day for us all. But I had to do my work, so after we got home, I fought every urge to nap to return to school.

And as soon as the car started, Cat Freaking Stephens was on the radio singing that "Cats in the Cradle" song to really drive the point home. That song is in much higher rotation in the past 100 days, I've noticed. How is "Cat's in the Cradle" remotely considered Good Times, Great Oldies? Those are somber, guilty times.

Anyway, it took me three hours more to move out of my classroom. I don't know if I will ever have a classroom again, actually. I might just carry on with my jaunt into administration to pursue a little higher salary, or I might see if there's some better way to finance our lives, being as the teaching gig is not so well compensated. Of course, every card and poem from a student I impacted was sorted through tonight, and that's really why we're in education anyway. But every second I spent going through everything I amassed kept me away from my family.

Well, the classroom is barren now. No toasters, no posters, no projects, no nothing. A blank slate (with thousands of staples in the wall) for a new teacher to spend his nights trapped inside. My boxes have made their way to my office, and most of my materials are to be divvied up tomorrow at a meeting. The hours away were productive and destructive. I came home to find the family asleep.
On my son's 100th day, I saw him for maybe an hour, and my wife had to cope with the change alone.

I don't want any more days like Day 100. As much as I love my students, I don't want saying goodbye to summer to be equivalent to saying goodbye to my family. I've got to change as a teacher to ensure that doesn't happen. Now I just have to figure out how to make that happen. Hopefully, son, when you read this, you'll see where I made a commitment to ensure you had a dad that was always there for you. Hopefully, "Cats in the Cradle" will mean nothing to you.

I miss summer and those first 99 days.
Posted by Rob MacGregor at 10:32 PM

Im right there with you Rob. Ive been trying to figure out a balance to this upcoming year. Since I help start the school I have had my hand in pretty much everything and anything that goes around and I have to be OK with NOT being a part of stuff. Being OK with going home right after school lets out..and getting all of my crap done at school and not taking home stuff. Love the summers off..but when your in the school year, your IN it. Definitely will be a challenge to find that happy medium. If you have any tips..please let me know.
We go back on Monday....not looking forward to the nanny drop off. Have already shed many a tears over it.
Love to you all.
Shamaa

So sad. Maybe you could celebrate day 105, it'll be Sat and you will have made it through the roughest week.

Watching the bigger kids/other babies get close to your baby is super rough at first, but I swear it will get easier and at one point, it will even become entertaining.

I remember watching some kid sneeze on V when she was four months old. I damn near had a seizure.

This post is so sad :(... things will be easier and you will be in a routine before you know it.

When Scott took Kingsley to daycare the first day, he cried the entire way home -- so you aren't alone Rob!