Last weekend, Jackson got to head down south to visit Uncle Chris and (almost) Aunt Melissa's house to celebrate his (almost) cousin Chelsea's birthday. There he got to see his cousin Colin again as well as meet our (almost) extended family of the Yorks. Chris and Melissa are getting married in just over a month, and we're all very excited about getting rid of those "almost's" in parentheses so we can just be officially family. At that point, we'll have our first niece and Jackson will have his first girl cousin. And because of that upcoming wedding, Jackson will also get to meet his other two cousins, Neil and William, when they fly in from California with Aunt Penny and Uncle Stephen (not to be confused with Uncle Stephen Noelle's brother nor Uncle Stephen Grandma's brother).

This is a lot of family talk, and you people are just here for pictures of the boy. Here are some pics from the get-together, with only one Jackson pic: 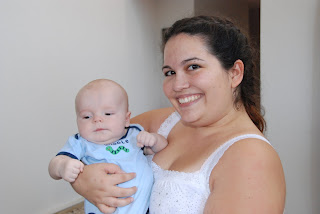 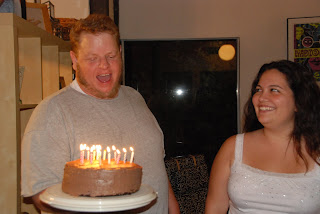 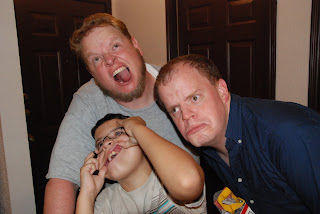 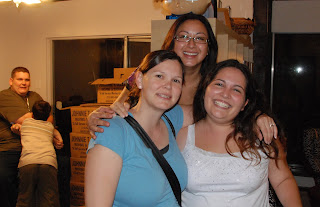 Noelle, Chelsea, and Sophia pose as Colin attacks Kevin
And now to my point. I'm so happy that Chelsea will be able to mention to Jackson how her friends at her nineteenth birthday party all gathered around his car seat to watch him sleep. I'm so happy that Jackson will hopefully inherit some of Colin's hand-me-down toys someday, and Colin will get to explain how special those G I Joes were to him, just like his dad did for me. (Chris also gave me his Legos, and I passed them down to Colin a few years ago, and when I asked Colin if he would give them to Jackson when he was done with them, Colin let me know he would never be done with them. That's a perfect response, by the way.) I'm so happy that William and Neil constantly outgrow clothes and send them to Katy for Jackson to wear, espcially when they can one day look at him and say, "Those pants were mine." Really, I'm so happy that Jackson will grow up with cousins nearby.

Me? I wasn't so lucky. My extended family was always an ocean away, back in England and Scotland. I've met my cousins a few times, but I've probably spent more time with most of you than I ever have with them. The last time I saw my cousin Claudia and my cousin Richard, I believe I was 8 or 9. The last time I saw Kirsty, Bridget, and Elena was 1999. I only got the chance to meet my late cousin Neil a few times, and I believe he was actually the cousin closest in age to me. Oliver once made it over here to the states, but that one fun night in Clear Lake is about the extent of my memories of him. I've met my cousins-once-removed Fraser and Alasdair, but there are a number of them out there I have never met at all.

More family talk that involves no pictues, so here's a video of Jackson talking and giving a shout-out to his second cousin Alasdair, who is apparently making ceramic wrestlers nowadays.
So anyway, the point - I don't know my extended family well, and it's something that has always made me a little sad. Noelle has quite an extended family, and I love getting to know Aunt Lori and Aunt Shelly and the Mays family and my new cousins. (My parents even spent an afternoon with Noelle's mom's cousin in Colorado the other week!) I finally have cousins nearby to get to know, and when Noelle's grandmother died last year, I was a pall bearer, which was an honor I never had when my grandmother and grandfathers died. It's nice to have that extended family now, and I'm honored to be a part of it.

But now, I'm regaining that family an ocean away as well. This handy internet is finally giving me a chance to get to know my family tree. My cousin Kirsty and my cousin-once-removed Fraser are Facebookers, so we get to hear little snippets of how the family is doing overseas. Granny just moved to a nursing home near Kirsty, so we get reports of how she's adapting to that new life. Fraser's in college, which always makes for some entertaining status updates that make us feel old. And it's not a lot of communication so far, but I'm so happy that I get to have cousins, both new cousins here in the States and old cousins over there in the UK.

I think the biggest "Internet-Trans-Atlantic bonding moment" came when I posted this video of my grandfather on Facebook. He passed away a year ago last Spring, and he was as silly and awesome as this video shows.
When I posted it, I got to see my cousin's son (my cousin-once-removed) respond by saying how he wants to be like him when he's older, and the same is true for me. My grandfather Neil MacGregor was sweet, silly, loving, and wise, and though I have not shared many experiences or conversations with my family overseas, I'm so glad I got to share a love for him and Granny with them. 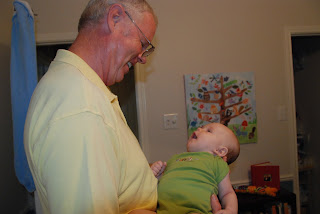 Jackson gets to know Granddad better

In other words - Hi Kirsty! Say hello to everyone for us!
Posted by Rob MacGregor at 10:02 PM

That was really long. I know who wrote it. Heh heh.

ha ha, I know who wrote it too. I'm glad you posted a few new pics of Jackson. I was about to start sending hints your way. I wish I could hold him (and so does Emily)

Yup. I love that there's a Geico commercial in the background...

I really enjoyed this one! I know what you mean about keeping up with cousins on facebook now.. it is awesome!

We feel very honoured to have such a special mention - the video clips are excellent (we do watch to the end). It was great to see Grandad and to hear his voice - he's greatly missed by us all. Likewise growing up we missed not being able to meet up but that can be ammended with the next generation and making it possible for them to do so. Granny's settling in slowly but positively. We hope your side of the pond will manage over for a visit as we'd all love to see/meet you. Jackson's lucky to have Chelsea/Colin/William/Neil plus Noelle's family to share with. Lots of love